Middle East Technical University (METU) Faculty of Architecture Department of City and Regional Planning, Turkish Education Association University (TEDU) Faculty of Architecture, and Çankaya Municipality, in association with Goethe Institut Ankara, are organizing an international symposium on Hermann Jansen, who played a significant role in the planning of Ankara, the capital of Turkey.

The symposium will be held on December 13–14, 2018 at the Çankaya Municipality Contemporary Arts Center in Ankara.

Hermann Jansen (born May 28th, 1869, Aachen; died February 20th, 1945, Berlin) studied Architecture at Aachen University, graduated in 1893 and opened a private office. In 1897 he moved his office to Berlin and continued his urban planning and design activities in Germany.

In 1918, Jansen started working at the Royal Prussian Academy of Arts, and was awarded the title of professor. He contributed to the planning of such cities as Riga, Lodz, Bratislava and Madrid, along with many cities in Germany. Jansen went on to draw up plans for Ankara, the new capital of the Turkish Republic, as well as several other Turkish cities between 1927 and 1939. The approaches and principles he applied to planning and urbanization, his city guides, his master plan-partial plan integrity, his urban imagery, his regulation and implementation processes, which were based on an urban image analysis of the city, would leave their mark on Turkish cities for many years, influencing the planners and designers who followed, and making significant contributions to the establishment and institutionalization of a Turkish planning system.

During the founding of the Republic of Turkey, Jansen, along with many other foreign planners and architects involved in urban planning projects, reached a synthesis that differed from other modern architectural and urbanism examples of the period, facilitated by the possibilities provided by the yearnings and foresights of the founders of the Republic and the conditions of the time in Anatolia. What makes Jansen stand out from the other foreign architects and urban planners that worked in Turkey is that he planned the capital of the Republic. Jansen also planned the cities of Adana, Gaziantep and Mersin, which constitute important urban growth areas of our day, while also putting forward proposals for urban regions in İzmit and other similar cities.

The challenge of creating a planned capital city from a small but historically stratified town that had to take on all the functions of a capital city are evident. In evaluating Jansen's choices in his profession and his achievements in practice, it is necessary to take into consideration the opportunities faced by foreign architects and planners in our country, when compared to the conditions in Europe at the time, as well as the limitations peculiar to the change in the social structure experienced during the transition to a Republic.

While radical changes were being experienced in both urban and rural areas in the country with the founding of the Republic in 1923, the creation of modern cities and an urban culture emerged as fundamental concepts in the formation of a modern society and country, a policy adopted by the founder of the Republic, the Great Leader Mustafa Kemal Atatürk. The selection of Ankara as the capital city, and the efforts to create a metropolis resembling examples in the Western world have been important steps toward the formation of and urban and architectural culture for the Republic, and within this process, Ankara constituted a model.

The "Jansen and Ankara" Symposium aims at stimulating debate on Jansen's approach to the planning and design of Ankara, within the scope of development and planning of cities and regions in the period in Turkey.

The international symposium has multiple objectives: to contribute to the formation of an urban culture in the field of urbanism; to facilitate an exchange of information between countries and the establishment of joint archives; and to encourage novel academic studies and researches by developing new perspectives and research questions on the theme.

The international symposium brings together researchers from the academic communities of different countries, especially those of Turkey and Germany, who have been working on the architectural and urbanism experiences of Jansen and Ankara, in order to create joint discussion platforms and working environments for the comparative evaluation of Jansen's professional practice as a planner and architect, especially in Ankara and Berlin.

International studies on Hermann Jansen and the planning and design processes of the city of Ankara are few in number. Considering that there are also a limited number of researches and publications on this theme in Turkey, this event focuses on the evaluation and interpretation of the information, documents and studies related to Jansen's planning works in Turkey and other countries in general, and in Ankara in particular.

Researchers who wish to make a presentation at the Symposium are expected to carry out and submit researches and evaluations that go beyond generalizations based on common knowledge and well-known documents. Within the symposium, it is planned to open discussions particularly on the topics listed below, and so participants are encouraged to focus on one or more of these topics with a view to facilitating healthier assessments about Jansen, Ankara and the period, and to highlight new research areas by producing new and original information on Jansen and Ankara.

• Hermann Jansen: His life and Practice

• The traces of the "Garden City" concept in Jansen's Ankara Plan

• The development planning process in the Early Republican Period: the relationship between the master plan and the partial plans

• The perception of the city and images in Jansen's Planning

• Jansen's approach to the old city and the existing city patterns

• The relationship between the urban and natural environments in Jansen's plans

• The planning and development of Ankara: from Lörcher to Jansen, and from Jansen to Uybadın Yücel

• Examination of the maps on which Jansen's plans were drawn

• Jansen and the planning process

• Urban problems created by Jansen at the Macro and Meso scales

• Jansen and his relationship with the architectural environment of the period 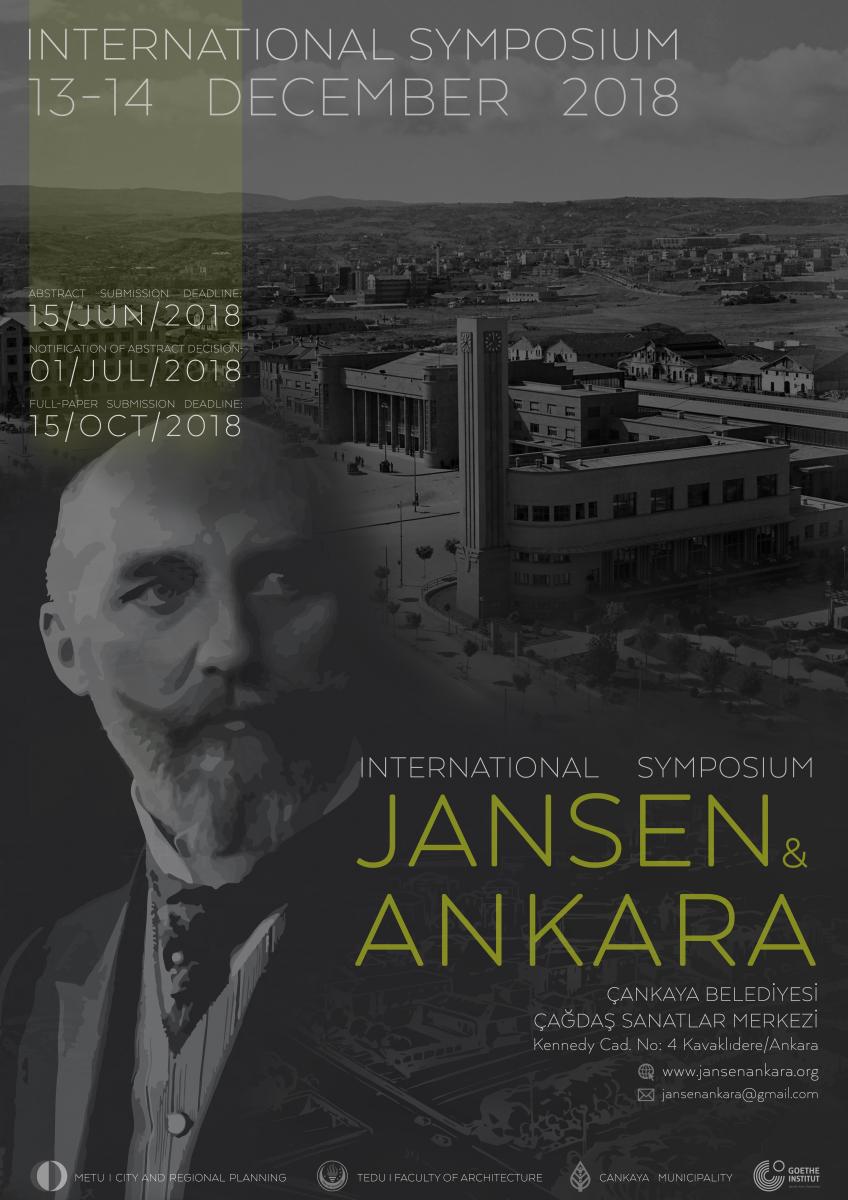